Funny thing about this is that I was 50% into this illustration when he mentioned Harvey Dent on the show. Maybe that was inevitable but I was really freaked out when he brought up an idea I had already started illustrating! Very weird!

Photo
Main reference photo of Harvey Dent from The Dark Knight movie. My version wasn’t nearly as cool but hopefully I got close. 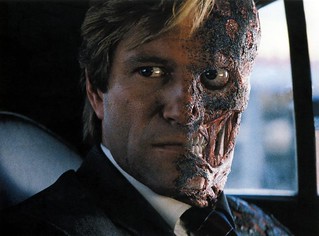