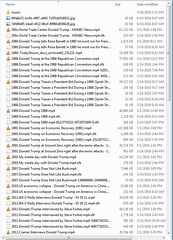 As some of you know I made (read: quickly threw together) a video a few months back that spliced together a selection of interview clips of Donald J. Trump from the past 30 years. I did it primarily for myself but shared it on YouTube for anyone else who might be interested. After a month or two the video hit ~300,000 views which of course blew my mind … but I figured, hey it’s an election season and people are out there in force looking for stuff to watch and share so I didn’t think that much of it.

Well after a few more months I found out at least 2 other people had re-posted my video in other places (kind of weird/rude but ok) and today I found yet another one on Facebook … crazily enough shared by one of my old college friends who may not even know I made the original! And the combined view count to-date of all of these copies is TRULY mind-blowing (at least IMHO). Here are the numbers as best I can track them (as of today) from all known copies of my video. Screenshot of my video on the InfoWars site!

I’m guessing some % of these views are repeats or flukes but even if you discount some chunk of them it is still, IMHO, CRAZY to know that such a large number of people have seen something I literally threw together at my desk over a weekend. I was telling my wife the other day I can barely fathom what 1000 people would look like let alone millions of people (and that was when I thought the view count was ~3 million)! So nuts. Plus, this video is NOT short … it’s almost 30 minutes long – which makes the view count even crazier IMO.

For the record I do not claim the video itself has any kind of artistic merit. It really is just a bunch of interview clips that were all individually available on the internet already and I just sliced them up, threw them together and put some music to it. By the way if you’re up for a laugh check out some of the comments in the original video comments thread … some people REALLY hated the piano music! Either way I’m very glad so many people have been able to see some of these clips. Trump is certainly not perfect but the media really does twist the truth so badly. #MAGA!

Again this post is certainly not me bragging or anything I just think the view count for this video is crazy … and after finding the new Facebook copy today I had to post about it and tally the numbers. Here’s the (updated, post-inauguration) video for reference/etc.

One of the YouTuber copies seems to have been taken down recently. Documenting for the record here:

I’ve updated the video to include the Republican convention, the general election victory and the inauguration. New version embedded above and here for anyone interested: https://www.youtube.com/watch?v=305-erOr3jk

FYI I made a 15 minute version for people who don’t have 40 minutes to watch the (mostly) uncut version. This new shorter one is here.

Fun side note – someone from a Japanese TV station contacted me about airing some (or all) of this video on their television channel! I of course said yes. Sadly I don’t have a clip of how/when it aired … so it could have been in a positive or negative light – no idea. Either way a cool thing I thought. Here’s a pic to recap: 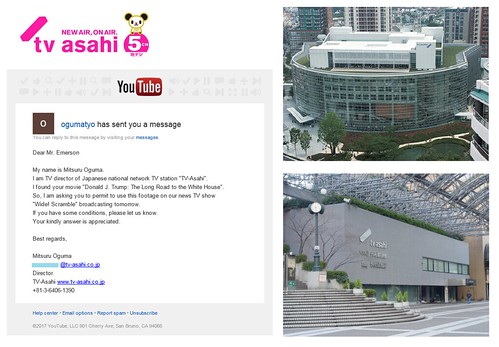 Found a taller screengrab from the InfoWars appearance … archiving here. 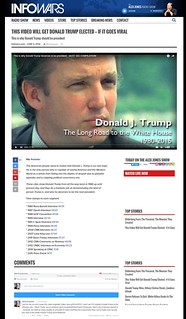 Once in a while a nice comment comes through so wanted to archive one or two as I get time: 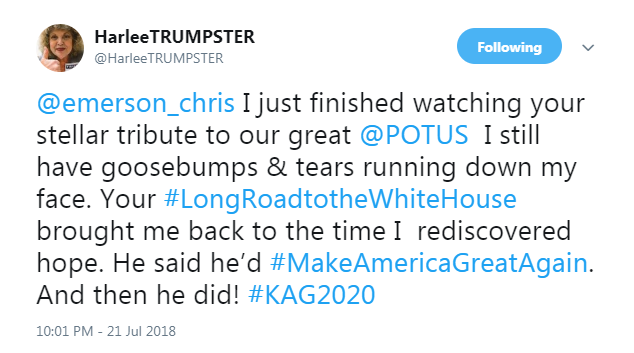 My 2017 Update copy just hit 1 million views on YouTube! Other totals above updated as well.

This one may seem a bit out of left field but a week or so ago I got an itch to put up a wall of people I consider heroes in my time along with links to their various social network links, podcasts, videos etc. I may or may not expand the list in the future as time permits but I’m going ahead and publishing it now with the first 9 people otherwise I would never release it. I’m sure none of the people on this list will ever know about this site and honestly no one else besides me may even know the page exists … but that’s enough for me. The site should generally work ok on PC, tablet or phone but there may be quirks I have to iron out over time.

Feel free to chime in if you have suggestions on people I might add, violent reactions you have to anyone on this current list etc. Here’s the link: 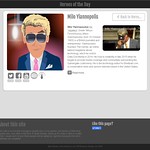 I know I know… a lot has changed since 2016 when I made this. Let’s just say there are only a couple here who haven’t let me down in some way. I guess that’s life – but I’ll leave this up as a reminder/time-capsule type thing.