Here’s a variation of my 2018 Christmas card … just a slightly different take on the scene.

This is a post just for myself since workouts are a personal thing for me … plus no one really cares about someone else’s personal workout achievements, right?. Anyhow, yesterday I hit 1,000 workouts in my workout tracker. Technically I passed this number a while ago I’m sure but yesterday was the 1,000th workout I’ve logged in the app I used nearly every day: Strong Workout Tracker. I am thankful for that app and even more I am thankful for my Bowflex SelectTech 552 Adjustable Dumbbells. Those dumbbells have lasted a really long time (w/not a lot of repair needs) – probably the longest-lasting, most-used thing in my possession (outside maybe my toothbrush and iphone?).

I may post background info here later … but for now just archiving the initial release of a new hobby project of mine called “Gridley™”. And for the record I’m well aware I went way overboard with this. It started as a “scratch your own itch” hobby project and I took it up a few notches just because/OCD.

The video below shows the basic idea/mechanics of the app. For more info or the download link head over to the main website here: https://cemerson.github.io/gridley/.

I’ve started trying to upload/link my app around so people can find and try it. Few notes on that:

PAD®?
First thing I started figuring out is this thing called a PAD® which is a “Portable Application Description” (details) that a lot (most) of software devs use to index/centralize information about their application(s). Still figuring this out but if it’s free/simple enough I’ll likely set that up.

MajorGeeks.com!
I also recently got the app into the MajorGeeks.com website. That is really cool because I’ve followed/used them for over 10 years and it’s pretty cool to have them accept my humble app into their site because they hand-pick what they list and they try it out first – very cool. Here is the description they wrote about it: 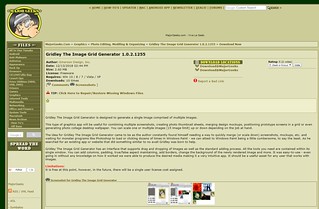 Gridley The Image Grid Generator is designed to generate a single image comprised of multiple images.

This type of graphics app will be useful for combining multiple screenshots, creating photo thumbnail sheets, merging design mockups, positioning prototype screens in a grid or even generating photo collage desktop wallpaper. You can scale one or multiple images (15 image limit) up or down depending on the job at hand.

The idea for Gridley The Image Grid Generator came to be as the author constantly found himself needing a way to quickly merge (or scale down) screenshots, mockups, etc. and waiting for monster programs like Photoshop to load or clicking dozens of times in Windows Paint – we can attest to Windows Paint being a little cumbersome, to say the least. As he searched for an existing app or website that did something similar to no avail Gridley was born to help.

Gridley The Image Grid Generator has an interface that supports drag and dropping of images as well as the standard adding process. All the tools you need are contained within its single window. You can add columns, padding, true/false aspect maintaining, add borders, change the background of the newly rendered image and more. It was easy-to-use – even going in without any knowledge on how it worked we were able to produce the desired media making it a very intuitive app. It should be a useful asset for any user that works with images.