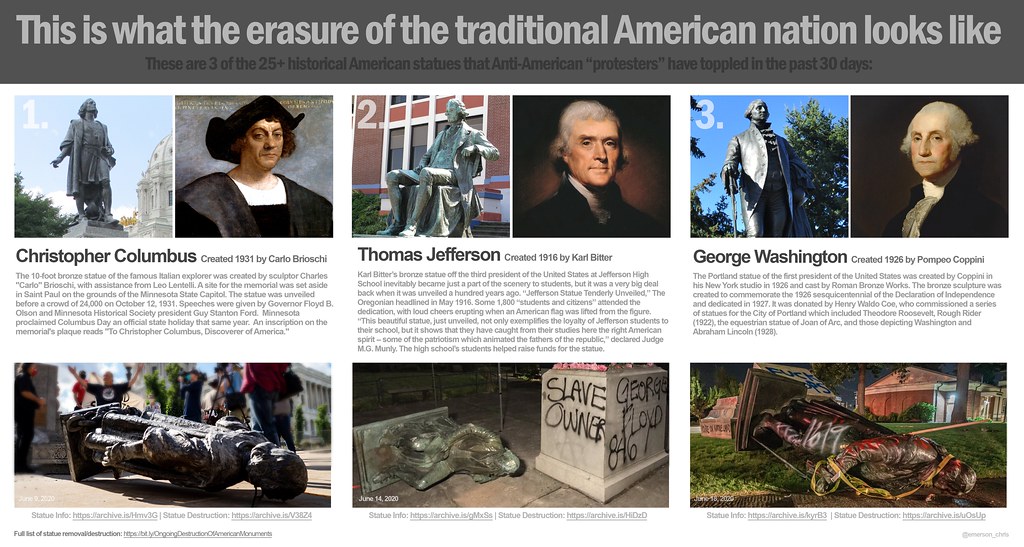 I realize this is a bit cringe/nerdy but after seeing the George Washington statue get toppled/defaced last night I couldn’t resist generating some kind of graphic about it. This is more of a info graphic not really an “artwork” thing. Anyhow … archiving here FWIW.

What does tearing down statues have to do with anti-police protests? Grievance against the historic American nation and its descendants. @NickJFuentes pic.twitter.com/ip71qBEulG

Tucker Carlson On The Left Tearing Down American History

"A violent mob is forcing its agenda down the throat of our country. Our leaders, very much including Mitch McConnell & other Republicans in the Senate, are too cowardly to resist them." pic.twitter.com/aJKVcLpwkh

.@NickJFuentes: We’re in a war for our country. It’s not a game. And traitors are worse than enemies. #AmericaFirst pic.twitter.com/IHstVnpFep

And down goes George Washington.

Every politician and pundit who’s spent the last week trying to rename military bases is complicit in this madness. Your pathetic coddling of these domestic terrorists led to this. pic.twitter.com/Qi9Vc0ihlY

The Jacobin mob tearing down statues of George Washington are not protesters. They're criminals who should be arrested for destroying public property.

The liberal local officials allowing and encouraging this madness are a disgrace. https://t.co/mD3FAt2PcH

Another American flag was laid over the toppled George Washington statue in Portland and set on fire. #antifa #BlackLivesMatter pic.twitter.com/Lm9e7Q84Gr

We all knew this was coming. This is a statue of Thomas Jefferson. pic.twitter.com/1Xc5DzE7MJ