Just archiving here for the record books. Actual details/notes can be found on the app’s Facebook page here.

I recently got inspired to add a new clock “skin” to my Wooden Clock iPad app. This time around I wanted the theme to be something about France. END_OF_DOCUMENT_TOKEN_TO_BE_REPLACED

Ever since I created my Wooden Clock for iPad app I wanted to update it to have the option of letting users pick from an assortment of different clock types for some variety once in a while. Well after over 2 years and many early weekend mornings I finally got around to doing that and the update just went live in the App Store.

The new skin – the first of hopefully more to come in the future – is the “Tibet” clock. I’ve been fond of Tibet for quite some time … probably in large part due to the film “Seven Years in Tibet” and my eternal fascination with Mount Everest – so I figured that theme would be as good as any to start out with.

The App Store database isn’t entirely updated yet so here’s the details of the new version in case it doesn’t appear in the App Store yet:

A brand-new clock has been added … the “Tibet” clock!

The new Tibet clock was hand-carved, assembled and painted in the majestic foothills of Mount Everest near the city of Lhasa. Ok … actually it was all done in Photoshop and a text editor in a dark office .. but that’s almost as inspiring right?! In any case I hope everyone enjoys the new clock!

First – in standard fashion I have to insert a disclaimer here that while I am calling this the new “Tibet” clock, I in no way am implying that I am capable of producing authentic, Tibetan artwork nor is the clock I’ve constructed anything anyone who actually lives in Tibet would recognize or find attractive at all. This is simply my humble attempt at creating a visual homage to Tibet … as well as a geek from the US suburbs is capable of anyway.

I did do some research on Tibetan furniture and artwork before starting. As one might imagine a large part of Tibetan culture and artwork is based on the Buddhist religion – but for various reasons I steered clear of that route and went with a more general, flowery and colorful approach instead. But even with that generic approach, I do hope the final product gives that classic Tibetan vibe … the bright yellows and reds against a bright blue (mountain) sky. On a technical note – the flowers and leaves on the clock were painted with the Procreate app on my iPad and the rest of the clock was created using Photoshop.

While I was packaging things up I went ahead and updated the app icon a bit too. I’m not in love w/the new version but like it much more than the last one I used.

The update with the new Tibet clock went live on the App Store today so users will get it the next time they update. If anyone has ideas or suggestions on new clocks I could add in the future swing by the Facebook page and post it!

Oh yeah – here’s the short app preview in included in this update – it shows the new clock in action! 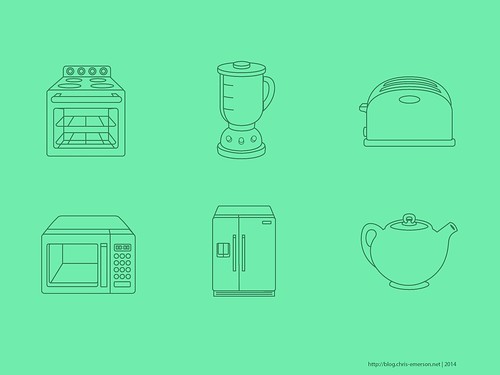 As I mentioned a couple months ago I wanted to play around with some line-art style icons to test my hand w/that sort of thing. Free time has gotten more scarce since then so I’m wrapping this up and posting the other icons I managed to create since the first one. Some funny trivia – the first toaster icon I did didn’t feel right because of the angle or something so I trashed it and made a 2nd one!

Anyhow these aren’t A++ icon quality but I feel good about the end result! Here’s a few different exports of different sizes and color treatments: 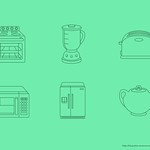 Yet another developer/designer post. This one has a fairly buzz-wordy title but the reality is that while the internets may be over-saturated with this kind of thing, so far none of the ones I’ve found work well for me – so I just made my own. Details on GitHub …

Here’s a teaser graphic for my new upcoming mobile app: KanaCards HD. While I’m really excited about the app the project itself has dragged on for months and months at an excruciatingly slow pace of a couple hours a week at best (!!) … so needless to say I’m flat-out exhausted with it. My hope is that my throwing out this teaser icon will get me the spurt of energy I need to get to the finish line!

PS: A quick Google search of this app name will bring up a fair amount of apps by other people … I’ll explain my logic around non-unique name and rationale for the app in general in my next post.